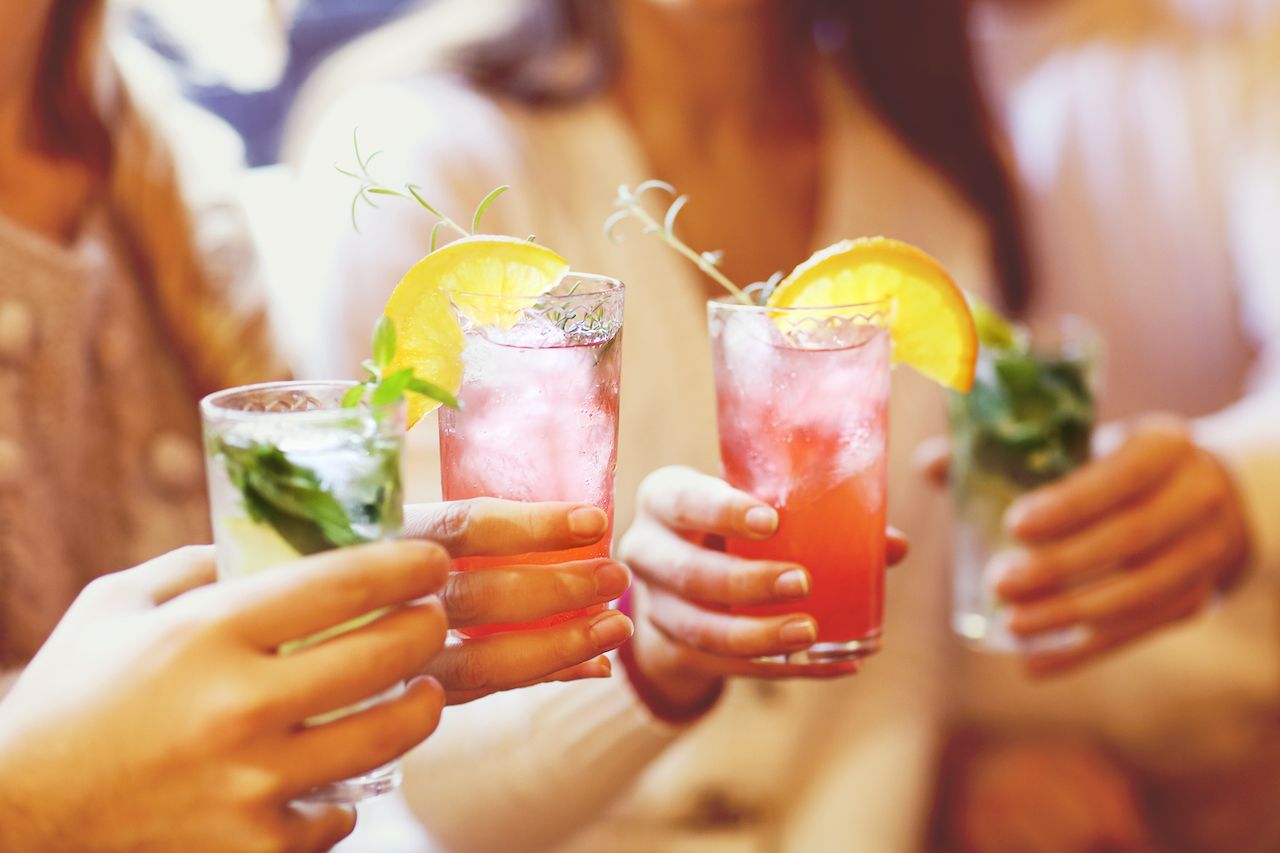 Few spirits are as English as gin. In the 18th century, England
experienced a period of dangerous consumption known as the Gin
Craze. Then, in the mid-1800s, British sailors began mixing it with
tonic water, inventing the now ubiquitous gin and tonic. Today, gin
is still the most
popular spirit in England — outselling even whiskey.

That’s the history of gin that most people know. But there’s
another, less-recognized, layer to the story. It starts with sloe,
a marble-sized plum-like berry that grows in blackthorn bushes all
over England. In the 17th century, these thorny bushes became
hedgerows that naturally fenced and protected private property.

One upshot of this sudden proliferation of hedgerows
is that an abundance of sloe berries grew among the leaves. The
ever crafty British country person, typically a woman who would
have been in charge of all domestic matters, took full advantage of
the annual sloe harvest — often by soaking the berries in
alcohol. Thus, sloe gin was born.

“It was just another way of preserving the fruit,” says
David T. Smith, author of How to Make Gin and Forgotten Spirits
& Long Lost Liqueurs. “Now a lot of people in the UK have
their own recipe for sloe gin, how their mother made it or like
grandmother made it. It’s very much a family kind of
thing.”

Women typically harvested and preserved the sloe berries and
other fruit around their homes for recipes throughout the year.
Women also hosted social events where sloe gin and other
fruit-infused alcoholic beverages would have been served. If you
were to attend a social gathering in England around the late 1700s,
there’s a good chance a woman — either the head of household or
her housekeeper — had a hand in every element of the cocktail you
sipped while socializing with your neighbors.

“Some of the first cocktail ingredients, and some of those
recipes for liquors and cordials we now see as essential to a lot
of traditional classic cocktails, evolved from women making recipes
for the home,” says Nicola Nice, founder of the gin brand
Pomp and Whimsy, which
aims to recognize the contributions of women in distilling and
bartending.

There was a reason that fruit-infused gin cordials — a low
ABV, sweetened gin that was sipped neat as often as it was mixed
into a cocktail — proliferated during this time: Up until the
mid-1800s, gin was often distilled at home and by companies like
Plymouth (which was established in 1793) in pot stills. Early
distilling methods often resulted in a low-quality, harsh gin.
Added sugar and fruit helped smooth out the taste by hiding the
gin’s impurities.

Smith explains that the Brits used many different types of
fruit, including apples, strawberries, and blackberries, to flavor
their spirits, as evidenced by recipe books of the time. The most
famous of these is probably Mrs. Breeton’s Book of Household
Management, published in 1861, though there were many others,
including Eliza Acton’s Modern Cookery for Private Families and
Elizabeth Raffald’s The Experienced English Housekeeper.

Isabella Beeton, the editor of Mrs. Breeton’s Book of
Household Management, aimed her encyclopedic, nearly 2,000-page
manual at the emergent middle class — people with a disposable
income and time on their hands because they were no longer spending
every free moment working but who still weren’t wealthy enough to
have servants that could take over day to day management of the
home. It included recipes for vanilla and strawberry liqueurs,
cider, and Pimms cups, among other cocktails, that women had not
only been serving in their homes and passing down to their
daughters for decades, but which were also written down in their
own private household manuals.

Beeton’s book solidified the housewife’s status as the
“chief entertainers,” as Nice puts it, of the era. Women were
mixoglisists in their own right, developing cocktail recipes
enjoyed by their immediate social circle. Women remained arbiters
of the domestic realm for much of history, but the gin cordial was
unfortunately destined to become old-fashioned.

In 1831, Aeneas Coffey popularized the patent still (also called
a column still), which uses a process called continuous
distillation. The result is a much cleaner, purer spirit that is
cheaper to produce, although its use is limited to
commercial distilleries. Though sweetened gins were still
popular in the mid-to-late 1800s, as evidenced by those household
manuals published throughout the 19th century, continuous
distillation did signal that eventually cordials would fall out of
favor, because the higher quality spirit meant fewer off flavors
that had to be masked.

But Smith says that fruit-flavored gin cordials experienced a
renaissance in the 1920s, ‘30s, and ‘40s. During this period,
which included prohibition and the decade after, the cocktail party
became an institution of American high society — and that’s
where the gin cordial found it’s audience across the pond.

“I think the cocktail party, which emerged in the early part
of the 20th century, is really an extension of what [people],
especially women, were doing anyway, which was having this kind of
ladies’ gathering in the window between afternoon tea and the
dinner party,” Nice says. “The earliest published reference to
[the cocktail party] was in 1917s, [hosted by] a woman in St. Louis
named
Clara Bell Walsh. This new phenomenon was a smashing success in
society.”

In 1920, just three years after Walsh’s sensational social
event, Prohibition hit the United States. The alcohol ban lasted 13
years but didn’t squash the cocktail party. In fact, it only made
it more popular. According to Nice, Prohibition pushed drinking
from the bars into the home, solidifying the cocktail party as the
most popular way to socialize of the era. By the time prohibition
ended, the cocktail party had spread from the cities into suburban
areas.

Just as in 1800s England when the cheap needed sugar to mask its
flavor, Prohibition-era bootleg gin needed to be sweetened. Gin
cordials and other fruit-flavored or sweetened cocktails would have
almost certainly been served at these gatherings. Today, the
cocktail party is still a beloved and widespread tradition —
though most people are expected to bring their own bottle of
wine.

Because women ruled the kitchen in the era when gin became the
go-to spirit in England, they touched every aspect of its
production: They were among the first people to infuse home
distilled gins with fruit, developed the recipes that were passed
down through generations of women and were eventually published by
enterprising homemakers, and helped solidify the tradition of
serving drinks and food at social gatherings through their duties
as hostess that would eventually lead to the cocktail party. Their
contributions were confined to the home simply because women of the
era were excluded from most professional fields, but it’s safe to
say that without their savvy minds and hardworking spirits, the gin
cordial simply would have never become a widespread and popular
drink that still appears on cocktail menus today.

Source: FS – All-Travel destinations-News2
The history of the gin cordial

The way ahead for Caribbean tourism – Dominican Today

May 1, 2020 admin Comments Off on The way ahead for Caribbean tourism – Dominican Today

An Uptick in Fraud Is Complicating Airline Refunds for Canceled Flights

April 27, 2020 admin Comments Off on An Uptick in Fraud Is Complicating Airline Refunds for Canceled Flights